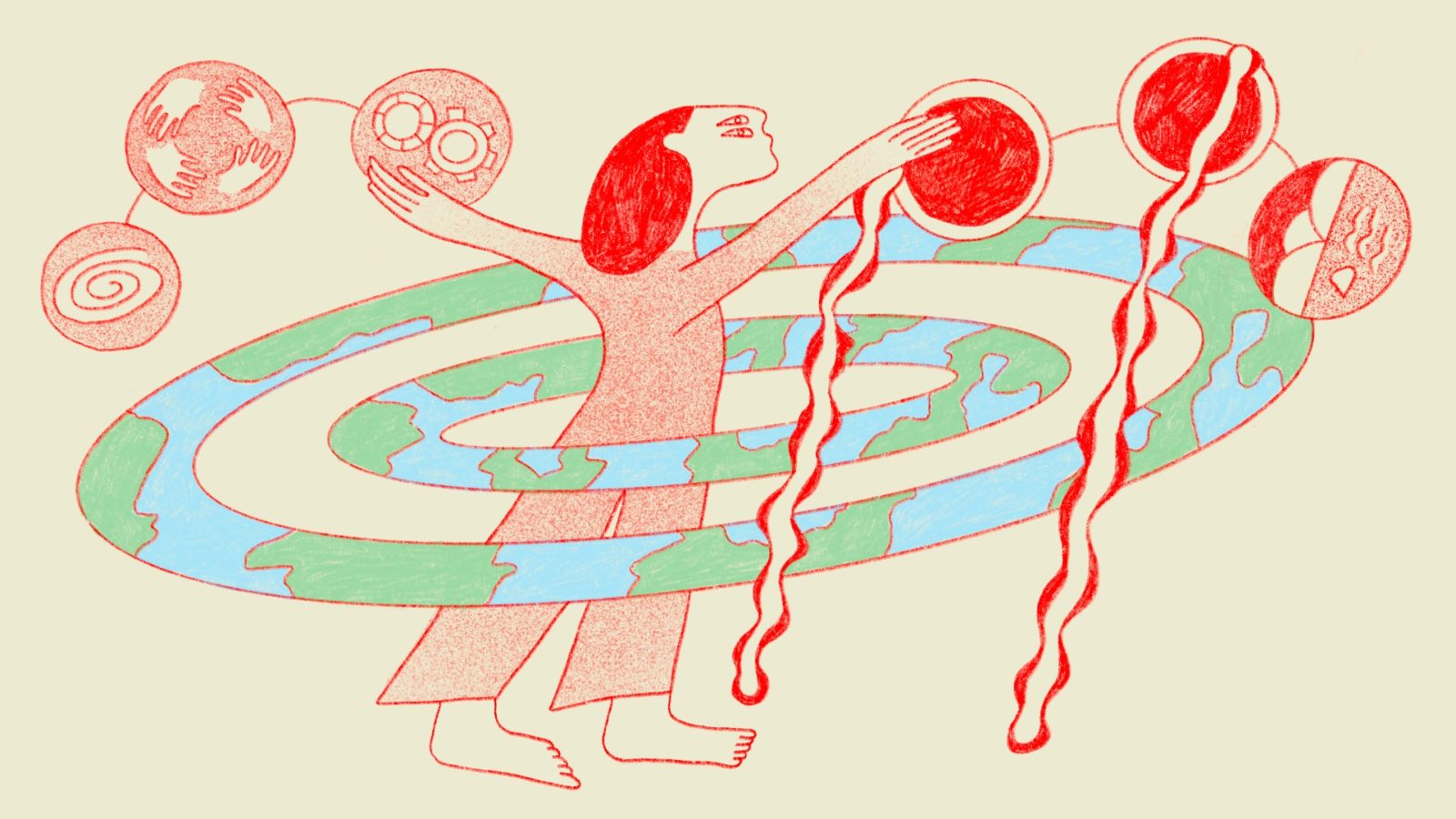 ISSUE #13 – Theses of today and tomorrow

It is now an established tradition: every two years, before summer, ISSUE publishes a selection of exemplary theses produced within the school’s various Master’s programmes1. Once again, the aim of this publication is not so much to present the best of the theses, but to offer an overview of the diverse issues faced by the school’s graduates, and the original methods, often specific to art and design, that they use to tackle them.

This second edition covers the 2021-2022 period, heavily influenced by the context of the pandemic. Its strong impact on the student community can be felt directly or implicitly in the choice of topics, how they are treated, and political engagement. Precarity, discrimination and inequality became more visible and unbearable during the various lockdowns, and run through the theses, for instance when questioning cultural activities in nursing homes (Camille Sevez) or narratives of African emigration (Mbaye Diop). The use of the first person, singular or plural, in a logbook (Oélia Gouret) and the experimental weaving together of voices (Loreleï Regamey) bring into conflict an active singularity on the one hand and power, be it patriarchal, capitalist or biopolitical, on the other. Digital tools, which made it possible for students to pursue their cognitive work remotely, are critically reassessed, whether it comes to the utopia of a supposedly immaterial Internet – whereas the Internet is actually heavily anchored in our physical environment (Chloé Michel) – or to virtual spaces where the multiplicity of genres, ethnical groups and world cultures fails to be represented (Tiki Bordin).

Other research works show a desire to escape this anxiety inducing context. Patrycja Pawlik explores techno in Poland, which couldn’t be heard live during the pandemic, as a generator of immersive spaces. The retrofuturist architecture of the ski resort of Avoriaz as a catalyst for fantastical imaginary worlds (Robin Delerce) and the spelling out of author Karelle Ménine’s poetry on our cities’ walls offer other escape routes. By focusing on the blackout decreed by the British authorities during the Second World War to protect cities from enemy night bombing, Martin Zambaz’s thesis can be read, for its part, as an allegory of those two years placed under the sign of silence.

The HEAD’s editorial office put together this partial panorama of the concerns spanning our community at the school with the help of the heads of the various Masters programmes, with our warmest thanks for their contribution.

How to continue producing, as an artist who belongs to a social group perceived as a minority? Behind the current openness of art institutions to so-called minorities, there are a number of difficulties for the artists involved, including Neige Sanchez, the author of this thesis. Sanchez, for instance, attests to the duty to represent a community, the feeling of being an alibi, the obligation to explain their reference codes. Their research considers a series of strategies that attempts to answer this initial question. The work of theorist Tina Campt on the politics of the gaze through black gaze and the development of a multisensory approach, of José Esteban Munõz on the processes of disidentification and fragmentation, and of painter Toyin Ojih Odutola on the re-creation of a mythified history through fictional and radical spatio-temporal displacement, all inspired Sanchez to propose a working methodology in which abstraction, opacity, diversion and multidimensionality impose themselves as modes of resistance and sustainability for the artist, in the face of market and institutional forces of recuperation, simplification and control.

In contemporary art, migrants are mostly represented from a dramatic angle. The denunciation of their fate once they have arrived in Europe, the risks of crossing the Sahara or the Atlantic, and the makeshift rafts on which they pile up underpin the imagery associated with migrants in culture and in the media. In his thesis, Mbaye Diop takes a more poetic viewpoint, focusing on the reasons for exile. A collection of anecdote-filled stories from the migrants of African origin that he met forms a song which gives a singular voice, and thus dignity and equal status, to this Tukki Republic (a Wolof word meaning travel). Diop’s thesis also stands out for its graphic aspect, with a layout based on scans of fake passport pages.

The humans living on this planet are settled in the different habitable zones of the planet, and they represent a wide diversity of genders, ethnic groups, cultures, and others. However, cultural media such as virtual spaces, and video games have shown a different reality. In this “reality”, the universe seems to revolve around the “normal Human”, meaning the heterosexual white male, who is the protagonist of all of these narratives. Interweaving a close reading of existing literature and qualitative interviews, Tiki Bordin′s thesis emphasizes and speculates on how virtual worlds can serve a more inclusive approach in Video Games.

Martin Zambaz explores a little-known historical episode, namely the blackout during the Second World War in Great Britain, when artificial lights were banned to protect towns and cities from German air raids. British authorities conducted numerous communication and propaganda campaigns to overcome the insecurity created by this unpopular measure. Zambaz analyses this production of messages to the population, from the most opportunistic ones – such as the call to eat more carrots to improve vision (actually aimed at selling off the abundant carrot stock) – to the most innovative, including the style of graphic design employed by the Royal Society for the Prevention of Accidents (RoSPA), which integrated progressive and federative values in a modern language to build up a sense of national unity in the face of the blackout.

The Internet is often considered to be something intangible. Yet it is rooted in a physical infrastructure that we all use every day. Why is its materiality so often forgotten? Why is it perceived as detached from the geographical world?
This thesis analyses how the Internet has been represented visually and textually over the course of its evolution. Through six case studies, chosen for their historical importance or the importance of their dissemination, Chloé Michel observes how these representations have influenced our perception of the Internet as a geographically anchored space.

Taking the form of a poetic and theoretical experiment, Loreleï Regamey′s thesis seeks to bring together the various voices that have accompanied her in the course of her long-term research on the political and subversive dimension of needlework. These practices of knitting and embroidery, which symbolise the submission of women at home, have been reappropriated as a means of expression and subversion. Needlework was and is also a field of exchange and subjectivation through the feminine sociability it induces. Regamey uses the title Re/member this house by author James Baldwin as a way of drawing out a series of real or imagined figures from sweatshops, sewing rooms, slave houses, and ethnographic museums which, through the weaving of the narrative, reconstructs an ideal house of repair and memory.

Techno and rave culture, which grew and inundated the world at the beginning of 1990s, are the entry points for this study. The phenomenon of collective dancing, new formats of parties, music as a central actor and wild appropriation of various spaces are just few elements which constitute a history of raving. The story of Polish transformation after the fall of communism in 1989’ and the growth of techno scene there, is a main background for this thesis. Looking at the spatial evolution of techno spaces from their illegal, underground beginnings, to their commercialised mature phase, materialised in monstrous festivals and immersive interiors of techno clubs, Patrycja Pawlik explores current potentials of these temporal environments, where body and dancing still play crucial roles for self exploration and social belonging.

Train trips punctuate this thesis by Oélia Gouret, which takes the form of a travel diary, but also of a pandemic’s log book, an extraordinary period also marked by intense exchanges, readings and politicisation. Setting out becomes a mode of self-construction, of breathing and inspiration, of temporary wiring in a world that isolates and closes itself off. Following in the footsteps of an autofiction writer like Guillaume Dustan, Oélia Gouret offers a richly illustrated text, where mobility is akin to a refusal of institutional power and the development of an identity that Elspeth Probyn would describe as a form of “outside belongings”.

Camille Sevez questions our relationship with old age in this thesis, based on a painful personal episode in which her grandfather died alone in a nursing home during lockdown. While old age is always lengthening, ‘old people’ are still not considered as anything more than sick people waiting to die. Therefore they are confined to these ‘non-places,’ where even the food no longer resembles what it is. Sevez develops several hints for creative workshops dedicated to this disregarded segment of society, which she presents as illustrated instructions for use. A workshop in an old people’s home however led her to question – with both humour and depth – the very relevance of her initiative, as an old people’s home clearly makes any collective creation effort sterile. The territory of the possible ultimately moves to a village, where it is easier to nurture social links through art.

In the city, the passer-by, in turn a stroller, a tourist and – more often than not – a worker in a hurry, is confronted with an overabundance of textual material: advertising signs, signage, but also the more informal repertoire of graffiti, activist inscriptions and urban frescoes. In an economic system that favours efficiency and speed, the existence of moments dedicated to reading and contemplation are becoming the privilege of a minority. Through an analysis of the practice of the Swiss author, historian and artist Karelle Ménine – who inscribes poetic texts in urban space – this thesis questions the politics of attention and the mechanisms of classist differentiation in the Bourdieusian sense, focusing on these contact points between literature and the city.

A planned settlement from the 1960s in Haute-Savoie, Avoriaz gained a strong identity in the popular imagination as an isolated, futuristic winter-sports resort made up of wooden towers and car-free streets thanks to the Avoriaz International Fantastic Film Festival, which fêted and promoted it from 1973 on. The Festival benefited from the advent of a new generation of filmmakers such as Steven Spielberg, Brian De Palma, David Lynch, John Carpenter, George Miller, Luc Besson, David Cronenberg, James Cameron, Paul Verhoeven, and Peter Jackson. For two decades, it was a gateway for many fans, largely contributing to democratising the fantastic-movie genre in France.
Rich in archive material and interviews with the protagonists of the Fantastic Film Festival, this thesis explores the event’s marketing dynamics and analyses the circumstances that led to its decline. It is also an opportunity to question the Festival’s memory and legacy on the occasion of the 50th anniversary of its launch, set for 2023.