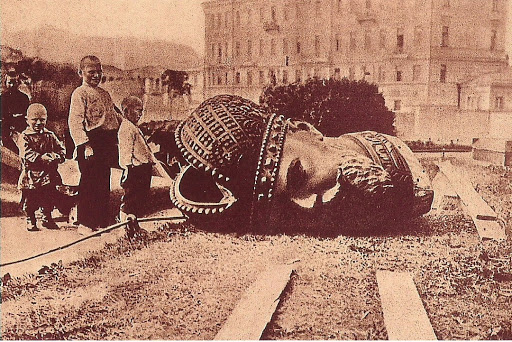 A Dream of a Cuttlefish

The night before I wrote this text I was terrified by a nightmare. Something was brewing in the city where I live, and before the massacre, together with feminists from Central Asia and the Caucasus, I had to save a group of children. The action unfolded very fast, soon my nightmare was almost identical to Sergei Eisenstein’s Ten Days That Shook the World. You say: “You are too dramatic, Sara.” (Replace dramatic with hysterical, insane, overreacting, whatever suits you better.) But I would argue that this is sort of allergy that many people from former Soviet Union countries have developed, based on their habitat. Every time I hear “all monuments must fall” or “iconoclasm,” my heart beats faster and with movements typical of cuttlefish I try to leave the space unnoticed. The obvious reason for that: monuments were falling non-stop in former Soviet countries since the beginning of the twentieth century.

It all started with a decree issued by the Council of People’s Commissars, “On the Republic’s Monuments” (issued April 12, 1918).1 This simple document of no more than two thousand characters (my article is a bit over 3500 characters) sealed the fate of many monuments built in imperial times. An interesting fact: this document was signed by monsieurs Lenin, Stalin, and Lunacharsky. Shortly after the decree, as many monuments were erected in their honor as had been had been erected to all the Russian tzars together. After his death, Lenin’s corpse was exhibited as a sacred relic in a special mausoleum, where he still remains today (!!!). Parallel to the decree on imperial monuments, the “Decree on the Separation of Church from State and Schools from Church” allowed the destruction of all the cathedrals and epiphanies around the country.2 Including the ravaging of graves with Orthodox sacred relics (except Lenin of course). The Mosque of Yaushev’s brother next to the house where I grew up was turned into a cinema. Well, I must admit the cinema option looks more pleasant than an explosion (for that, see the Cathedral of Christ the Saviour) or a cowshed (see Guzel Yakhina’s novel Zuleikha Opens Her Eyes)3. Not long after then, the communists [the Soviet government?] switched to the destruction of unreliable/bourgeois/enemy elements – real humans of all ages, races, and nationalities. That’s how my Kazakh great-grandfather was killed on one of the Solovetsky Islands more than 3000 kilometers from his home. For Soviet communists, he was probably in a way a monument of nomadic feudalism. Cursed as bourgeois, the Kazakh shepherd was shot dead and his family destroyed. Almost 100 years since he was killed, six of his granddaughters (one of them my mother) still refuse to talk about him with me (scared of KGB). Ironically, just as my great-grandfather was, I too am from time to time referred to as bourgeois, in this case by citizens of the European Union. Extremely interesting power relations and a fascinating question: who was the real bourgeois in both cases?

You say: “Sara, let bygones be bygones. After all, the Lenin monument in your home city was gently removed to the outskirts, epiphanies were rebuilt, the mosque returned to Muslims, the once-upon-a time-dissolved-in-acid tzar was canonized, and Alexander Semin playfully introduces the question of Lenin’s removal from the mausoleum in the short movie It could have been us, but we have Lenin (arguably sexist and idolizing Europe).” And I agree with you, my friend, monuments fall, monuments get removed and Columbus is just as unpleasant as Ermak. But for every removed monument of Lenin, we got a new one of Turkmenbashi, Elbasy, conquerors of Crimea, etcetera, etcetera.4 So, for me, the most important question here is not whether or not all monuments must fall, it is how not to build the new ones.