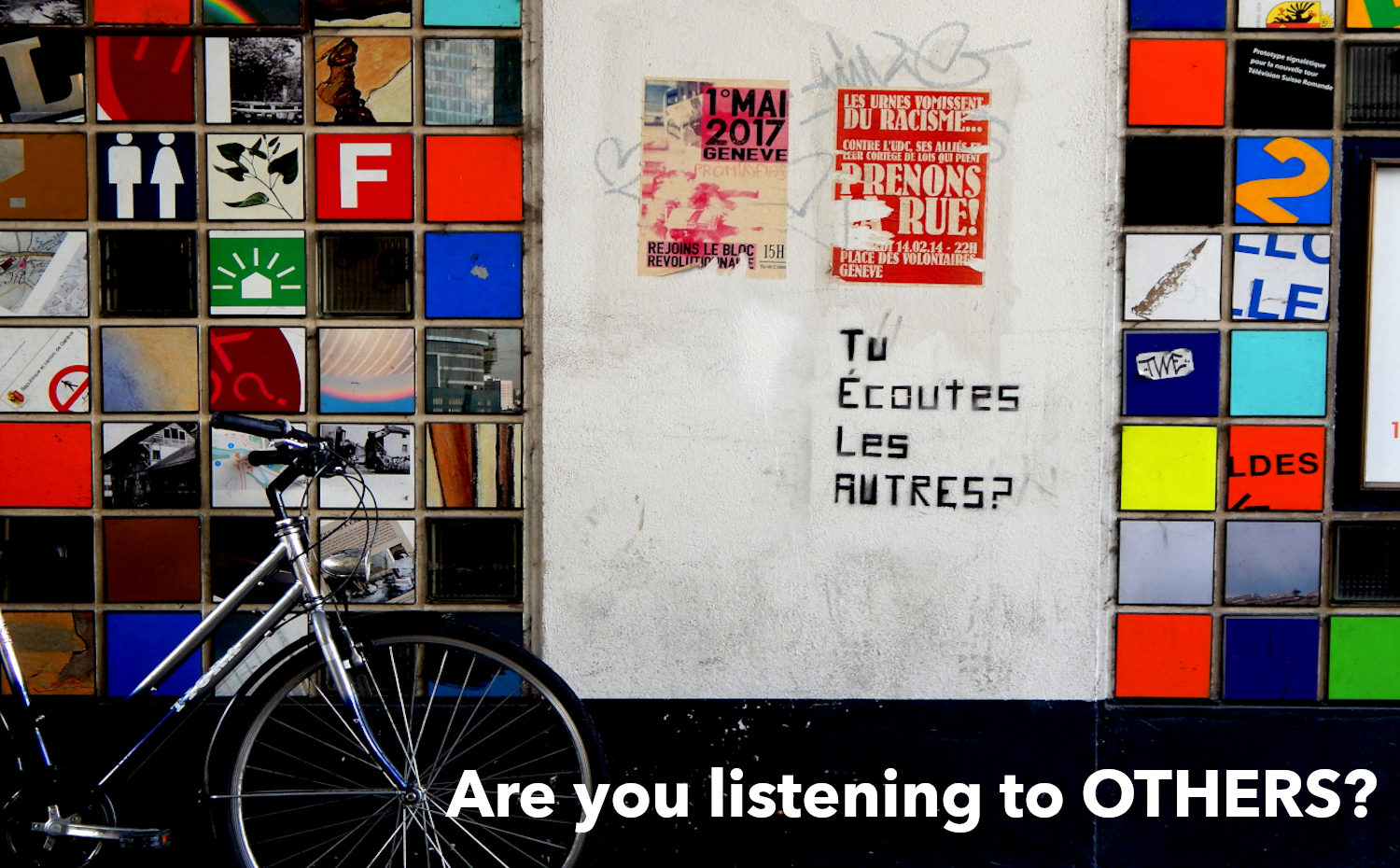 Are you listening to OTHERS? - Geneva, July 2019. Photo by the autor.
CCC Research-based Master Programme

Decolonize Listening. Or how to tear down the monument of Hegemonic Listening

One night, I was sleeping in my studio, when at around 2am the sound of music from the Arab world woke me up, and a few seconds later, my neighbor yelled at the person to shut up. The person answered: “You have no life!” That phrase and the situation in general resonated a lot with me.

I think it is necessary to ask more questions. Why did my neighbor and I react in such in a different way to the same situation? If the Arab person had chosen to project another type of music, like music from the Western world, would the same thing have happened? Or if he had been a white person, would the same thing have happened? Do we listen to all people in the same way? Or do we alter our attention and our judgements depending on one’s skin color, their origin, their religion, or even their profession, their socioeconomic status, their way of speaking, their confidence? Who has the right to be heard? Who chooses who has the right to be heard?

I agree with the black, feminist, lesbian, mother, warrior, poetess from the United States, Audre Lorde, “we share an Earth and we need each other, but we are not each other, we are different. I can know and respect our differences, you must know and respect mine. That is the only way we can work together”.1 It is not our differences that separate us, but the fact of not dealing with our differences, of not talking about them, of not listening to them, of not taking them into account, and of not respecting them.

Just the day before writing these lines, I attended a talk by Brazilian artist Mabe Bethônico about the work that she is exhibiting in the Contemporary Art Center, in Geneva, Switzerland. Through her work, she talks about the lack of knowledge we have in Latin America about everything that happened before and during the colonial period, all the lost lives and cultures, all the violence, deaths, and all the violence our ancestors lived during that period. But I dare to say that in Europe, the United States and the other hegemonic countries, the vast majority of people are not aware of what happened in that period either. In the educational systems of Latin America, we constantly make references to the history and culture of Western countries. But Westerners rarely turn to see the ways of making and thinking in the countries of the Global South. It is a story that continues to play on today. The story we learn both in the countries of the Global South and in the hegemonic countries is the story told by the latter, a Euro-centrist, Western-centrist history, which has already established who has the right to speak, to listen and be heard – a “hegemonic listening,”2 as Nikita Dhawan has called it, wherein the only valid knowledge and heard voices are those of the hegemonic countries. It’s a history in which all the violence that the colonial project inflicted on people different from Western cultures is not seen. In the Global South, some ways of doing, ways of thinking, beliefs and languages have been forbidden, while others have been imposed. Voices have been silenced. The colonialists prohibited the right to speak. They prohibited the right to listen. They prohibited the right to be heard.

Our ways of listening, of interpreting the sounds that are heard, are in turn built on a personal level as they are built according to our geographies and cultures, our communities and societies, by our economic and political systems, and even by violence and lived repression. Moreover, I agree with the Australian geographer and sound artist AM Kanngeiser that “it is impossible to talk about listening to the relations between people and environments without being attuned to the ongoing impacts of colonization and imperialism including resource extraction, dispossession, climate change and disaster capitalism.”3

In this sense, our way of listening bears a historical burden, on both a personal and collective level: our way of listening is an indication of how we relate to other people and even environments; it indicates the differences we have with other people and also how we can come to understand each other. To listen to other environments, in these environments, to other people, with people, we first need to become aware of and take responsibility for who we are. The philosopher Rodrigo Toro together with the musician Donovan Adrián Hernández Castellanos, both from Mexico, suggest that to listen, we first have to decolonize our listening. What this implies is asking ourselves “not just what we hear, but where we hear it from.”4

AM Kanngeiser positions listening in a very similar way:

Questions like ‘from where do I listen? How do I listen? To what do I attend? What do I hear?’ are necessary to thinking about environments and ecosystems. These questions show us that we are always working across difference… The simplicity of such questions belies a profound and critical recognition and responsibility essential to any movement toward abolishing a world built on white supremacist violence and dispossession. The kind of listening that I am attempting to theorize alongside and play with here is slow and makes up many lifetimes’ work and thought undertaken by many people across many places. It seeks to undo how we know, live, relate and comport ourselves. It seeks to undo abstractions of harm, capitalist extraction, domination and complicity. It also places us in definitive relation with how, where and what we inhabit and need to claim. What is at stake, then, in this listening is the dismantling of what we think we know toward an imagination of becoming otherwise.5

In this sense, I think that the proposal of the Brazilian, non-binary, writer and performance artist, Jota Mombaça, is very important, as they suggest that instead of asking, “Can the subaltern speak?”6(a question posed by the Indian philosopher Gayatri Chakravorty Spivak), it is more important to question the capacity of the hegemonic cultures to listen. In their words: “Can a domineering knowledge listen to a subaltern speech when it comes up?”7 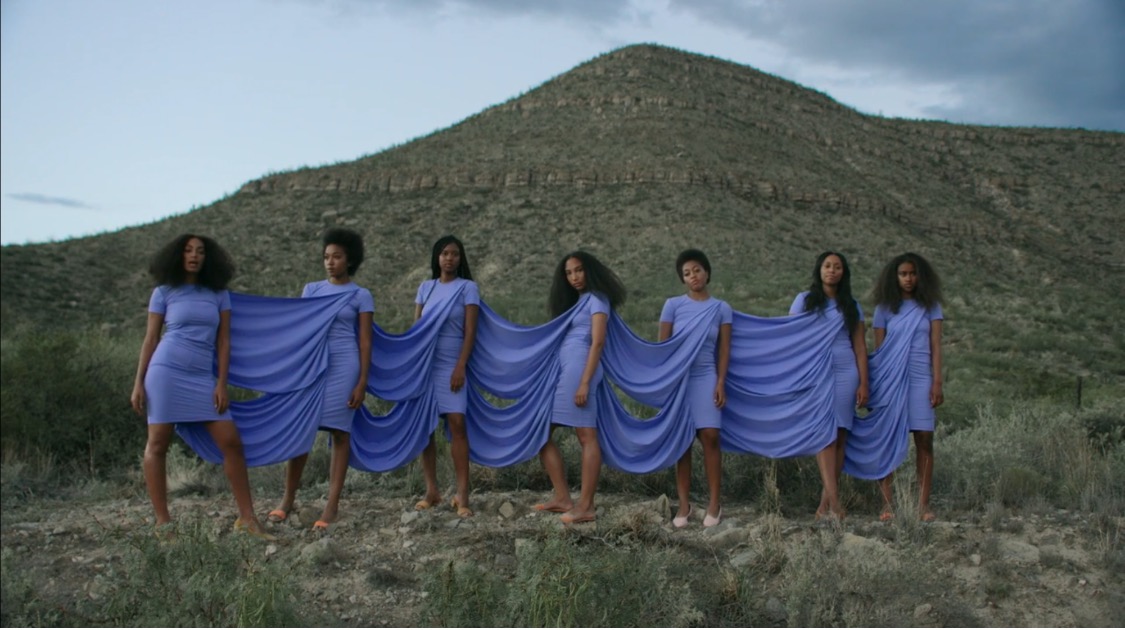 MA in Fashion and Accessory Design Thesis by Tara Mabiala

In her Fashion and Accessory Design Master’s thesis, Tara Mabiala tackles the question of sustainability in fashion through an affective and political approach. Instead of focusing on an optimisation of production modes…