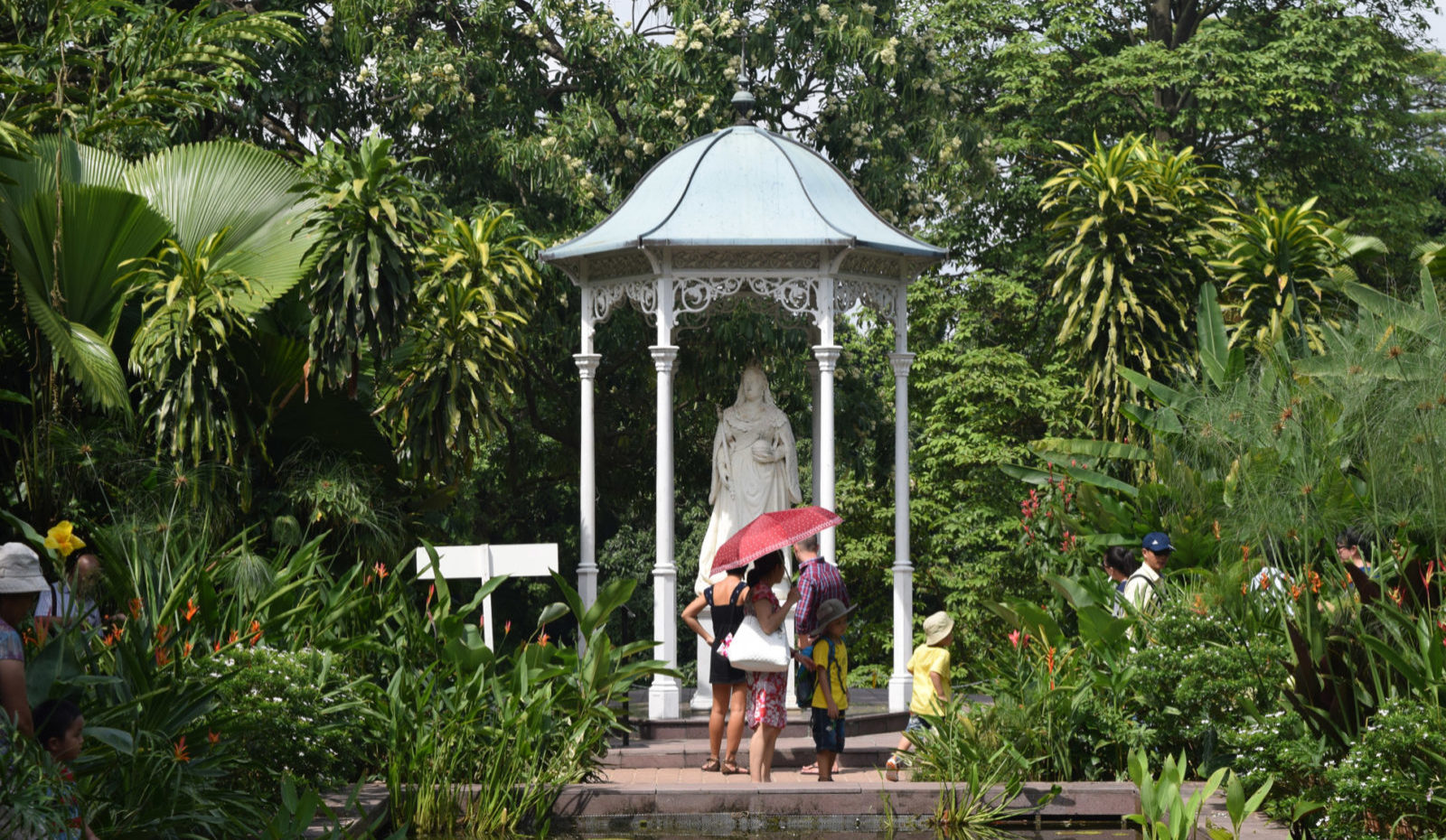 A 27-year-old man mounts the bronze statue of Queen Victoria before pouring red paint on it and smashing her nose in with a hammer. He then covers himself in paint and sits next to the statue admiring his handiwork.

This was a performance entitled Red Action by Chinese artist Pan Xing Lei, who had moved to Hong Kong from Beijing just the year before. Having participated in the Tiananmen Square democracy movement as a student in 1989, he promptly attended a June 4th vigil1 in Victoria Park only to find himself feeling sickened by the sight of thousands of people kneeling under the towering figure of Queen Victoria, symbol of the omniscient gaze of imperialism. “People just pretend not to see it”2 he thought, and promptly set about changing that fact.

Some rightly interpreted the act as gesture against British rule, while others clairvoyantly read the red statue as a sign of colonialism simply changing its colours.3 This was a rare act of iconoclasm, criticised at the time for being superficial and destructive, reminiscent of the actions of the Red Guards during the relatively recent Cultural Revolution4, the trauma of which is still felt today.

The statue was promptly restored to its original state and one year later on July 1, 1997, Hong Kong was officially handed over to China. Hong Kong had by then been governed by the British for the past 156 years, longer than living memory.

Protests have been raging across the island. In the past four months there have been 42 protests that numbered over 10,000 people, some gathering over two million, which represents almost a third of the total population.

Among the numerous ‘monuments from below’ such as the Lennon Walls which sprung up during the year of protests, some more officious monuments were also co-opted into movement. Touting the protective gear of hardhat and gas mask, Queen Victoria is dressed as one of the front line protesters or ‘braves’, and a banner reading ‘Liberate Hong Kong, revolution of our time’ hangs at her feet.

This is where it gets sticky.

Following the umbrella movement5 in 2014, Hong Kong society has been cleaved into two main camps6 – yellow (supporters of the movement) and blue (detractors) – which are representative of the binary that has come to dominate discourse within and around the movement: “Hong Kong vs Beijing”, also read as “Democracy vs Autocracy”7. This posture is particularly favourable to the wealthy in Hong Kong who profit from its laissez-faire neoliberal systems and want to lead the discourse away from the spectrum of ‘left’ and ‘right’ in order to keep questions of exploitation and inequality under the rug.

It is therefore also an ideal binary for western democracies such as the US and the UK that share this economic interest, as it allows them to stand on the side of ‘Democracy’ (conveniently diametric to ‘China’) without having to get into the aforementioned messy questions that they themselves struggle with at home.

The invocation to ‘liberate’ Hong Kong begs the question of who is to do the liberating. The appeal is presumably aimed at the UK (and by extension the USA) to pressure China into honouring the Sino-British Joint Declaration8, which ensures 50 years of self governance during the transition period from British to Chinese rule. The principal demand of the protesters is that of universal suffrage, but not necessarily independence from China9. This implies extending the semi-independence of the ‘one country, two systems’ ad infinitum, as the possibility of Hong Kong’s independence from China would likely be contingent on its dependence on another big power.

So is this why a Chinese artist was the one to do violence to this monument that represents colonial rule while a pro-democracy movement, rather than toppling their previous autocratic ruler, includes her in their cause?

The only way for me to answer this question is to introduce myself as a Singaporean. Singapore is another tiny island and ex-British colony that was granted independence in 1965. It also has a statue of Queen Victoria, located in the grounds of the presidential palace. On the few days of the year during which the Istana is open to the public, the Victorian monument becomes a tourist attraction.

This is the fate of innumerable relics of Singapore’s colonial era – its buildings preserved and converted to art museums and swanky hotels to visit, prestigious missionary schools to attend and churches to worship in. The statue of Sir Stamford Raffles is pointed out to visitors to the island, for this man is credited as the “Founder of Modern Singapore”. This is how I have been taught to refer to him, and to frame the corresponding narrative: that there was nothing before, and whatever there was is but of little significance10, which I have until recently never questioned.

Both Hong Kong and Singapore were important trading posts for the British Empire, there were no raw materials to extract here. The two islands thus flourished and prospered as goods and gold changed hands on their shores, as it still does today albeit that the spoils no longer go to the Crown. The memory of imperialism is therefore seen through the rose-tinted glasses that the islands’ good fortune has bought from the numerous other places and peoples whose fates reflect the other vampiric side of the colonial coin. Smashing up a statue of Queen Victoria would therefore be to spit on what was portrayed as, and to an uncritical eye is still seen as, one of our benefactors.

Perhaps this is why Pan, being a politically engaged artist born and raised in China, had enough distance from British rule to recognise the statue as a symbol of oppression, as well as the gall to attack it. Not to mention that the performance did wonders for his career as it gave him immediate international visibility and placed him, in the mind of the Western art collector, in the circle of rebellious Chinese artists bravely shaking off the restraints of Maoism. I cannot help but wonder if he would have dared carry out this performance today or on a statue of Mao himself, given that anything perceived as an attack on Chinese rule would not be tolerated with a mere 28 days’ imprisonment.

A word on punishment:

A Study of Perspective: Tian’anmen (1997), is a photographic work by Ai Wei Wei which shows his outstretched hand holding up his middle finger, flipping off Tiananmen square in the background. It lives at the M+, a contemporary art venue in Hong Kong that opens to the public this year, but is one of numerous works that will remain unseen in the vaults as certain pro-Beijing politicians have suggested that these artworks incite hate or even threaten national security11. The sentence for anyone convicted of violating the newly passed National Security Law12, starts at 3 years and can go up to life imprisonment.

In Singapore, vandalism is punishable by a fine or imprisonment of up to 3 years, as well as a mandatory 3 to 8 strokes of the cane. These stiff penalties were adopted in 1966 in direct reaction to political opposition by socialists and students protesting the Vietnam war by putting up ‘Yankee Go Home’ posters at bus stops near the American Embassy. The existing sentence of a 50 dollar fine and a week in jail was deemed insufficient deterrence, so the government turned to legislating corporal punishment in order to make the consequences of ‘vandalism’ humiliating rather than heroic, and framing the ‘vandals’ as criminals rather than political actors of dissenting opinion to be recognised. Given that this law is still used in the same way today13, it is unsurprising that the few (unsuccessful) calls to remove the aforementioned Raffles statue following the wave of falling monuments in 2019 was done via online petition14 rather than with a hammer.

Such severe recriminations clearly indicate the symbolic power of iconoclasm, which is perceived as a threat to the state and its legitimacy to impose cultural norms and the unique historic narrative that public spaces are designed to reflect.

Must all monuments fall?

Monuments, be they architectural or statuesque, are so much a part of our everyday surroundings that we often forget why or even that they’re there, until the day they change or disappear. Their constancy comforts us, acting as a guiding beacon on a drunken walk home and permeating the backdrop of our memories. Slowly, an emotional attachment develops, barely perceptible, to this steady presence that comes to represent stability. Yet this familiarity is not as precious as we think it is, and if it is a hindrance to our own deconstruction, it must fall.

What we are to deconstruct is the multitude of oppressions that a monument can and often does represent, be it Colonialism, Autocracy or Capitalism… These oppressions lie buried in our unquestioned histories and narratives, erecting in us little Monuments of the Mind so deeply integrated that we continually embody and inflict these same systems of violence upon ourselves and others.

As we consider the toppling of physical monuments around the world, my hope is that one by one, all of these monuments, in each and every one of our minds, will fall.