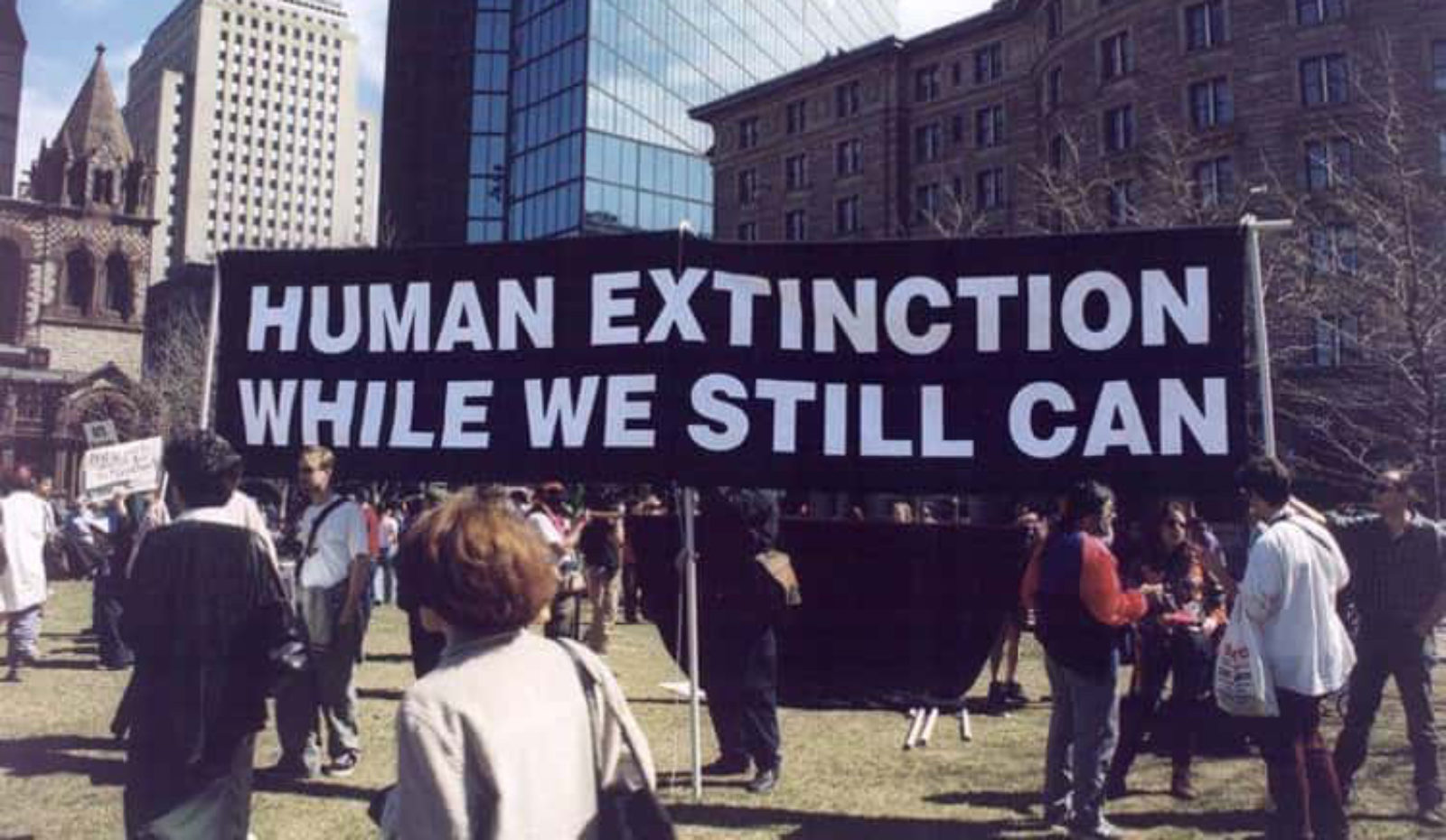 After a dream in which an extraterrestrial intelligence warned them that the planetary ecosystem was collapsing, the situationist artist and electronic musician Chris Korda founded their ‘religious’ Church of Euthanasia movement in 1992, which they endowed with a single commandment: ‘Thou shalt not procreate’ and a slogan repeated everywhere from house records to banners: ‘Save the Planet – Kill Yourself.’ Thirty years later, the grotesque comedy of this nihilistic stance hasn’t worn off, while its observations on the state of the planet appear all the more bitterly visionary and intra-terrestrial. Urgent questions arise in the face of the devastation of ecosystems and resource depletion. These emerge in a singular way in a school of Art and Design, where students are trained to produce objects.

How can art and design practice be combined with ecological issues? Does production necessarily imply a form of destruction? What forms might a turn towards deproduction take? This feature considers these issues via three complementary approaches. Firstly, it looks at the practicalities of measuring the impact of a project that makes it possible to acknowledge emissions and reorient practices in a virtuous way. The carbon calculator project initiated by Yves Corminboeuf, sustainable development delegate at HEAD, is presented here using the actual case of a Talking Head conference.

Historically speaking, the hypothesis of deproduction echoes different conceptual and critical practices that have questioned the status of the object or the directive to build a career. At a time when the utopia of digital dematerialisation is proving to be very energy-consuming, David Zerbib engages in a reflection on the contemporary dialectic of the material and the immaterial. Departing from conceptual art practices, he sees the emergence of ecosystemic thought within the very instability and multiple reconfiguration of contemporary artistic productions.

Logically speaking, the watchwords of this questioning of productive logic are resource conservation. The pursuit of this objective takes multiple paths and is often filled with joy rather than a sense of deprivation – as are Chris Korda’s songs. Removing, undoing, giving up, recycling, repairing, reallocating, sabotaging become practices in themselves. A series of articles in this feature focuses on a few radical practices, by historical and/or recalcitrant figures in art and design, but also by HEAD students and teachers who rethink their production, improduction or deproduction in the light of the ecosystemic challenge.

The artwork’s ecosystem and the materiality of the world

The notion of ‘ecosystem’ finds a strong echo in contemporary artistic practices. Influenced by the neo-materialist approach, which challenges the primacy of the subject and considers matter to be endowed with vitality, some artists showcase works that are open to mutation and alteration, of which they no longer are the operators. In this essay, David Zerbib posits that the ecological crisis first and foremost provokes a change of the human position in a polycentric network of plural agencies, before urging artists to withdraw from the productive system or engage in immaterial practices.

Yves Corminboeuf is a pioneer of sustainable design in Switzerland. A lecturer and delegate for sustainability at HEAD, he helps numerous organisations to take into account the ecological issues specific to their model of production. He is also active in the field of reuse through Matériuum, a much-appreciated upcycling centre in the cultural sector that collects and sells construction materials. In this interview with Elizabeth Fischer, which features a long introduction, Corminboeuf looks back at the origins of the notion of eco-design and how designers can limit their impact on the Earth system’s resources.

In addition to being one of the world’s most polluting industries, fashion subjects its workers to some of the most degrading working conditions. In the face of these abuses, consumer mobilisation remains negligible. Based on this observation, Mikhail Rojkov has launched a series of awareness-raising actions, including the repair of new ripped jeans that he puts back on the shelves to point out the system’s excesses and absurdities. However gentle and caring, such interventions trample on certain principles at the heart of capitalism, including private property. In this text, Rojkov discusses the boundaries between vandalism and embellishment, and the potential for political transformation concentrated in a thread, a needle and an act of love.

Architecture has long been synonymous with construction. The realisation of the destructive dimension of such an enterprise on a global scale is now pushing architects to consider other ways of pursuing their practice. Nobuyoshi Yokota’s project for Leonid Slominsky’s RE:WORK studio in the Interior Architecture Master’s offers to repurpose an abandoned railway guard house in Crans-près-Céligny, in the La Côte vineyards, as a place to learn the wine trade. Through minimal architectural interventions, Yokota endows these remains of the early days of railway with a programme that links ecological, social and economic thinking.

An innovative report on old technologies

New technologies often come with harmful side effects, on both the ecological and psychosocial levels. Rather than putting the emphasis on novelty, Kris De Decker tries to address our human needs with articles about forgotten technologies, recycling, repairing, and ingenuity. De Decker publishes his articles online on Low-Tech Magazine, which he founded in 2007. The creation of a low-energy version of the Low-Tech Magazine website – powered by a solar panel installed on his balcony – not only combined the medium with its content, but demonstrates the creative potential to be gained from frugality.

Design teacher and researcher Nicolas Nova (HEAD – Genève, HES-SO) – himself the author of a research project on cell phone repair stores – talks with De Decker about his exciting and inspiring editorial project and tackles the political significance of a paradigm shift from production to de-production, maintenance and repair.

From user-centred design to design that removes

User-centred design has imposed itself solely on the development of computer interfaces and protocols. Far from being neutral, on the contrary, this approach to design is biased, because it is based on certain clearly identified users – workers, consumers – while other more precarious populations, or those with less formatted practices, remain in its blind spot. Reducing an object’s thinking to its sole use also comes at the cost of a more global reflection which could integrate, for example, the waste the object will eventually become. At the invitation of the Rennes Digital Tech Conference 2021, Anthony Masure, head of research at HEAD – Genève (HES-SO), and Brieuc Saffré, director of the Circulab circular design agency, started a critique of user-centred design in order to consider other avenues, from citizen-centred design to design that removes rather than adds. We publish here an audio version of this discussion moderated by Julien Vey, president of Saint-Malo’s Institut supérieur de design.

In recent years, historians have taken an avid interest in the radical withdrawal from the art world and/or political activism of certain figures, with diverse motivations and backgrounds, such as Carla Lonzi, Lee Lozano, Shulamith Firestone and Agnes Martin. The Freistilmuseum (free-style museum) was initiated by three Aargau artists in the 1970s. Although the museum isn’t part of this feminist genealogy, it sheds its own light on distance from the art market and working from the periphery, through a materially non-productive activity akin to a form of mediation. As a student, Julie Enckell Julliard got enthusiastic about the critical counterpoints created by the Freistilmuseum when it introduced everyday objects into exhibitions by other artists. Twenty years later, she re-examines the eco-systemic value of this practice of relating.

Between concept and competence

In 1981, Ian Burn posited that conceptual art was responsible for a loss of manual skills among artists. By putting the emphasis on conception, artists have deprived themselves of the specific knowledge that was previously at their disposal when they painted and sculpted. In this landscape of deskilling, Zoë Sheehan Saldaña chose to take a paradoxical position. Since the early 2000s, she has been exploring industrial modes of production by reproducing consumer goods by hand or by craft. Her practice gives rise to a history of the organisation of work and capitalism in which Ileana Parvu sees the possibility of slowing down.

How much CO2 universities release?

The HEAD and the HEG have joined forces to develop a carbon calculator to measure the impact on the climate of the activities of the Universities of Applied Sciences and Arts (HES) in French-speaking Switzerland. Led by Anthony Masure, Yves Corminboeuf (HEAD – Genève, HES-SO) and Laurent Cornaglia (HEG), this research project is currently in its final development phase. It will then be available via a self-service application. For this feature, we have calculated the emissions of matali crasset’s lecture in January 2022, using this tool.