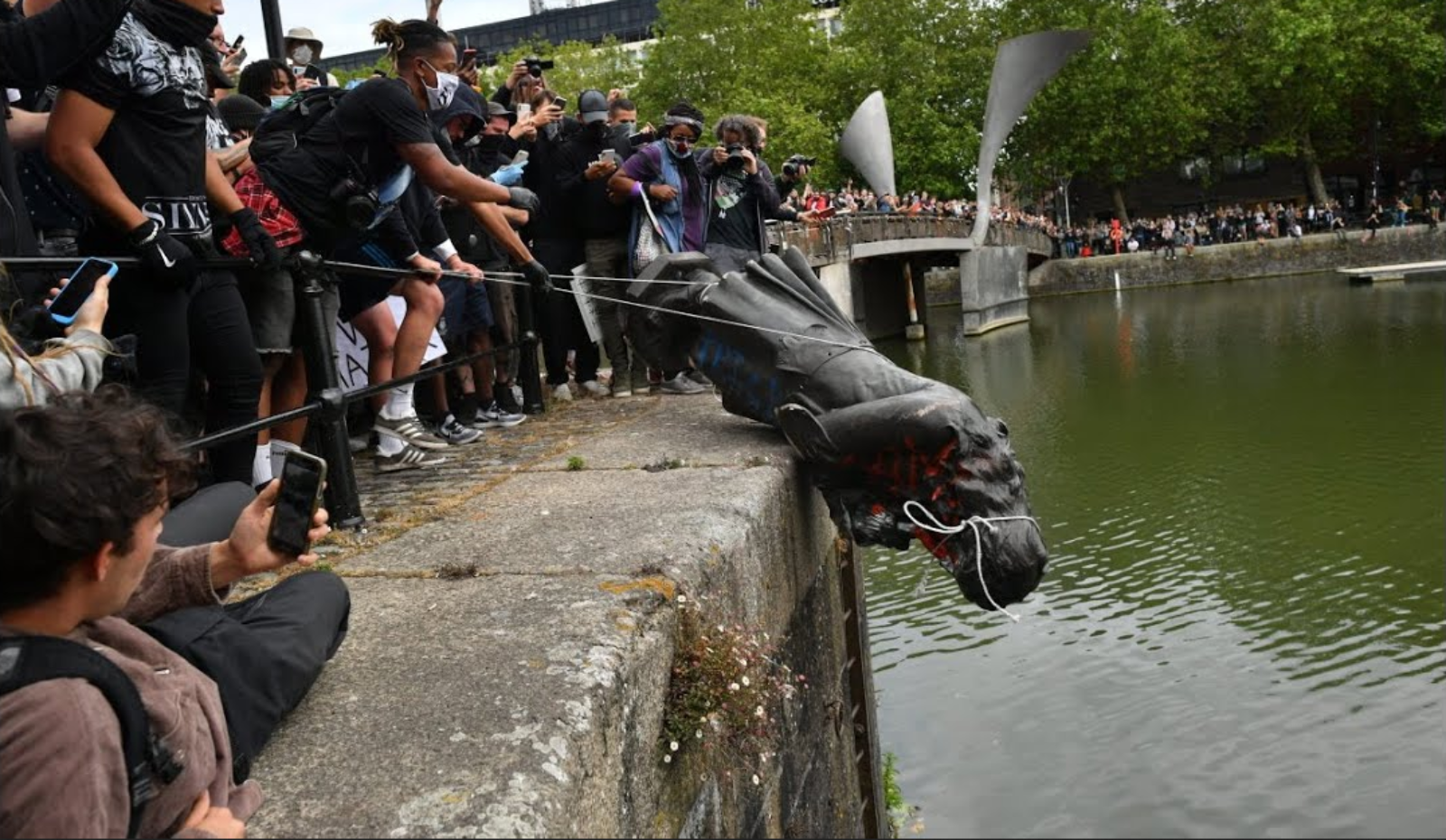 ISSUE #8 – All Monuments Must Fall

Episodes and Counterimages from a Present History of Iconoclasm

“All Monuments Must Fall.” Four words, calling out and calling up. An indictment of police terror, a demand for an end to impunity. A toppling of white supremacist, settler colonial patriarchs: Robert E. Lee and Christopher Columbus, Cecil Rhodes and Leopold II. And more: this “all” reaching the roots of monumentality itself, imagining a reordering of public culture and public space, a summoning of the common to come. Iconoclasm: the breaking of a dominant image, or the breaking of its power, its spell or grip or bad aura. The breaking of regime and amnesia. A proposition, then, for a reparative repatterning, a Now-Time of Justice.

The Critical Studies Seminar of the CCC Research-based Master Programme took the proposition and practice of All Monuments Must Fall as its 2020-2021 focus. (The phrase itself comes from the excellent online syllabus collaboratively produced by a Baltimore group, discussed in the introductory essay, below.) Through readings, discussion and immersion in the visual evidence of this new moment of iconoclasm, the seminar reflected on the differences between remembrance from below, the monumentality of official history from above, and counter-memorial artistic practices. The construction of history, the ideology of monuments, and the social and political functions of public space were critically explored. Some artistic interventions into the cultural politics of memory and forgetting were considered and discussed. Students were asked to choose examples or case studies, either from the public spaces of Geneva or elsewhere, for further investigation and reflection. Professor Roberto Zancan from the Space Design Department completes the issue with a reflection on monuments and memory in Venice.

All Monuments Must Fall

In this introduction, Gene Ray (HEAD – Genève, HES-SO) reviews a series of recent events, mostly related to the Black Lives Matter movement, which may suggest that a new iconoclasm has begun. Ray associates this aggressive way of questioning the dominant history – by attacking statues – with Nancy Fraser’s ecological concept of wilding. He thus creates an alliance between decolonial movements and climate activists who, in recent years, have similarly diffused forms of indiscipline in the public space.

In 1996, shortly before the handover of Hong Kong to China, an artist sprayed the statue of Queen Victoria with red paint and disfigured it with a hammer. The meaning of this action remained ambiguous. Was it an attack on British colonial power? A return to the methods of the Cultural Revolution’s Red Guards? Or the broader idea of one empire succeeding another? In light of the new ideological division in Hong Kong – in which the Victoria statue was appropriated both by the “democracy” camp and the Chinese repression of dissident forms of action – Phoebe-Lin Elnan advocates deconstructing the forms of mental oppression that certain monuments represent.

In this text, Roman Karrer examines the way in which the names of streets, squares or mountains lend such places a symbolic dimension. The name of the botanist and zoologist Louis Agassiz, born in Fribourg, Switzerland, is found in almost 80 locations, even on the Moon, and is an example of this kind of problematic anchoring. Long unaddressed, the racism of Agassiz – who, in defence of white supremacism, opposed Darwin’s theories of evolution – now makes him a famously controversial figure. Karrer discusses the various ways in which Agassiz’s name was glossed over (or not) in recent years, and considers some positive developments, including the tribute paid to the black science fiction novelist Octavia E. Butler, whose name designates a point on the planet Mars.

Since its construction in 1909, the Reformers’ Wall in Geneva’s Parc des Bastions has been vandalised numerous times. Based on this history of tagging and painting, Basile Collet considers the way in which vandalism participates in the disruption of a supposedly pacified public order, reigniting debate and social conflict.

All Revolutions Must Be Collective

But what must fall? This podcast interviews members of French-speaking Swiss resistance collectives who stand against forms of oppression such as racism, patriarchy and police authority. This question broadens the notion of ‘monument’ to include institutions, such as prisons or the police.

In a country like Spain, where the memory of Christopher Columbus is regularly brandished as a national cement and source of pride – and with the institution of monarchy in decline – debates over the demolition of his statues arouse widespread disapproval. Román Alonso analyses the myth of the “discovery” of America in the Spanish imagination and the place occupied within it by the numerous monuments dedicated to Columbus, symbol of the beginnings of colonisation.

Like a dialogue between languages, this bilingual Spanish-English text also takes the form of a song and then a harangue. The text revisits Chilean history through the demonstrations against social inequality that took place in Chile in 2019. These events led to the overthrow of the equestrian statue of General Badequano, a military man who participated in the war against the Mapuche indigenous people.

A Dream of a Cuttlefish

Sara Bissen compares the psychological trauma left by her experience of sometimes violent historical events in the former Soviet zone – where a series of brutal regime changes were punctuated by the overthrow of statues – to the repetitive cycles of statues being erected and overthrown.

Must (monumental) Water Fall Too?

The liquid element is omnipresent in Geneva, a city known for its harbour, its Jet d’Eau, rivers and fountains. Yet numerous infrastructures also channel and domesticate this water in a draconian way. In this text, the author attempts to bring out a Genevan spirit in the examination of water-related monuments in the city at the end of the lake.

Decolonize Listening. Or how to tear down the monument of Hegemonic Listening

Based on a neighbourhood dispute between an Arab man who listens to loud music at night and an unidentified person who demands silence, Balam Ronan Simon Delgado reflects on the politics of sound and listening. He hypothesises that our way of listening is marked by the burden of history on both a personal and collective level, influencing our relationship with our environment.

For 25 years, Geneva benefited from a squat scene that was rich and crucial, both socially and culturally. The squats were occupied under various legal arrangements, defying real-estate speculation. The authors of this text take the position that the squats had become monuments, which nonetheless were eradicated by a concerted policy in the 2000s, which the authors discuss.

Hey, Hey, My My… Can Monuments Ever Die?

All those who have visited the Venice Biennale have noticed a monument on the waterfront in front of the Giardini, almost in front of the Swiss Pavilion. It is the famous memorial Alla Partigiana, designed by Carlo Scarpa – the master of post-war Italian museum architecture – in collaboration with the sculptor Augusto Murer. But few know that this complex hides a key episode in the confrontation between contemporary art and political terrorism in post-war Italy. In fact, this low and horizontal monument is a reconstruction of a previous monument destroyed by a terrorist act aimed at desecrating the object of the testimony.

One night in 1998, a collective amputated the foot of an equestrian statue of Juan de Oñate in New Mexico. In this article, Gene Ray examines the multiple echoes of this iconoclastic act, a reference to the mutilation of indigenous Acoma people 400 years earlier by the Spanish conquistadors, to whom Oñate belonged.

Ode to an Empty Plinth

In a 1997 issue of October journal devoted to the Situationists, T.J. Clark and Donald Nicholson-Smith rejected the narrative that, in the early 1960s, the SI renounced art in favour of politics. In reality, the organisation only renounced conventional and representational forms of art, all the while defending the utopian dimension of the artistic project. Gene Ray develops this argument by relying on the action of the Situationists at the Place de Clichy in Paris, where they tried to reinstall a statue of Fourier.